Well, our fair city can breathe a collective sigh of relief…SXSW ’14 is officially behind us.  This past Saturday marked the final official day of the festival, and practically everyone I knew was at home in bed watching movies all day on Sunday.  It takes most revelers several days to recuperate, actually…one day vegging out over reality TV is not enough.  The hubs & I skipped church (despite my best intentions) in lieu of Joel Osteen’s televised service, and spent the rest of the day catching up on the DVR.  {{Btw, this last episode of The Walking Dead?!? –OMG!!!}}

One of the coolest things I saw during the whole festival was Game of Thrones: The Exhibition at Austin Music Hall.  As I mentioned during my previous SXSW post regarding running into Simon Helberg of The Big Bang Theory, I majorly geeked out during this experience as a Game of Thrones fan, too.  First off:  they let you sit on THE IRON THRONE — I mean, I die.  I was channeling my favorite female character, Khalessi, up there but my college roommate saw this Instagram where I proclaimed I would “take what is mine, with fire and blood!” & proceed to comment that I would make a perfect Cersei.  …um, please no.  lol 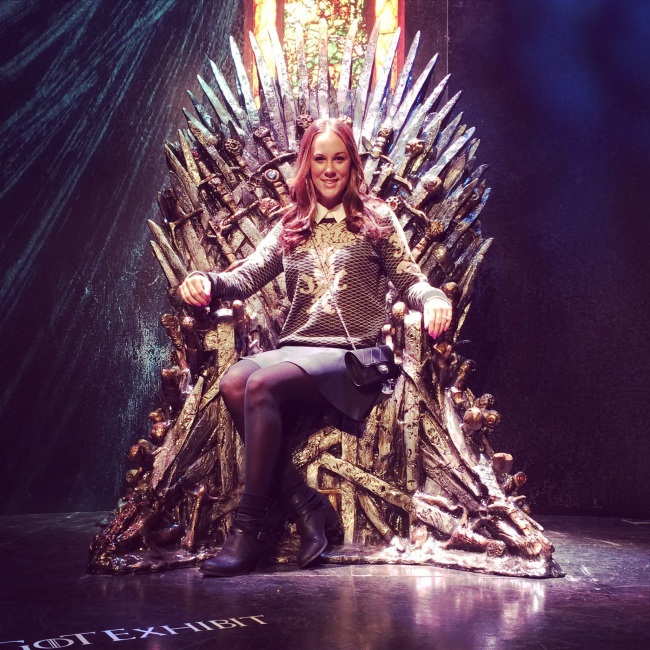 The virtual reality experience blew my mind…they call it a thrill ride and it really did feel like it!  It was as if I was on a ride at an amusement park, but instead of risking your life on a gravity-defying roller coaster, you are just standing in a cage seeing everything through this VR ski mask thingie.  They call it 4-D and I guess that’s because the images before your eyes are obviously 3-D but then they add in another layer of “reality.”  For example, as you scale ‘the wall,’ you feel your primitive elevator shaft shaking and the cold wind blowing on your skin.  If you’re fortunate enough to catch the tour in Rio De Janeiro, Oslo, Toronto, Belfast, or Vancouver in the coming months you definitely need to wait in line for this part of the exhibit.

Our biggest event of SXSW week 2 was attending the Jimmy Kimmel Live show at the Long Center for Performing Arts.  It was both of our first time to attend a TV show taping and it was such a cool & different experience.  I felt fortunate to get to do such a thing not in L.A. or NYC, but right in our very own hometown.  Plus, at the last minute, our tickets got upgraded to Priority seating and although that meant we had to arrive an hour earlier, I was eager to take advantage of that priority status!  We had GREAT seats:  about ten rows from the stage, lower level, right in the center; such an excellent vantage point to take it all in. 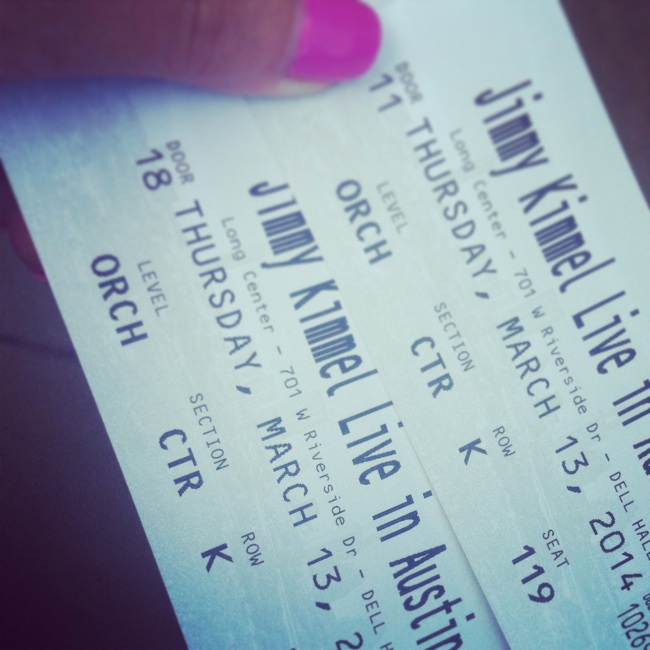 Guests of the night were legendary guitarist Johnny Winter, an Aussie band called The Preatures, some chick from Scandal, and LADY GAGA.  Of course, aside from Kimmel’s hilarious opening monologue, Gagaloo’s visit was the highlight of the evening.  Yes, this was the same day as her infamous SX performance at Stubb’s where she let some performance artist VOMIT on her onstage.  But for our experience, she showed off a less-weird side of her personality and we were intrigued & delighted the whole interview.  C’mon, how could you not be entertained by Lady Gaga? –She came out via pedicab in this elaborate white dress & big hat made entirely out of coffee filters!  She called it “upcycling.”

By the way, I have to applaud the splendor of his Austin-themed set!  Talk about seeing (our city’s) name up in lights — it was a neon-fueled feast for the eyes.  Thank you ABC for sending Kimmel to Austin in such an elaborate fashion…and for donating all the stage signs to local charity!  It was an afternoon/evening about 5 hours in the making, but sitting in that audience was a unique entertainment experience that encapsulated everything from stand-up comedy to live music performances.  Good times.

After the show, of course my husband was starving so we bolted for dinner at Arro, a French restaurant on West 6th.  During the short walk from the Long Center to the restaurant, everyone was curious about these mysterious numbers appearing in the sky.  Sound strange? –It was.  This series of numbers was broadcast across the horizon, skywriting style. I had all kinds of crazy theories as to what the numbers meant:  –is this some self-destruct code for a CIA mission? –are we in the TV show LOST? 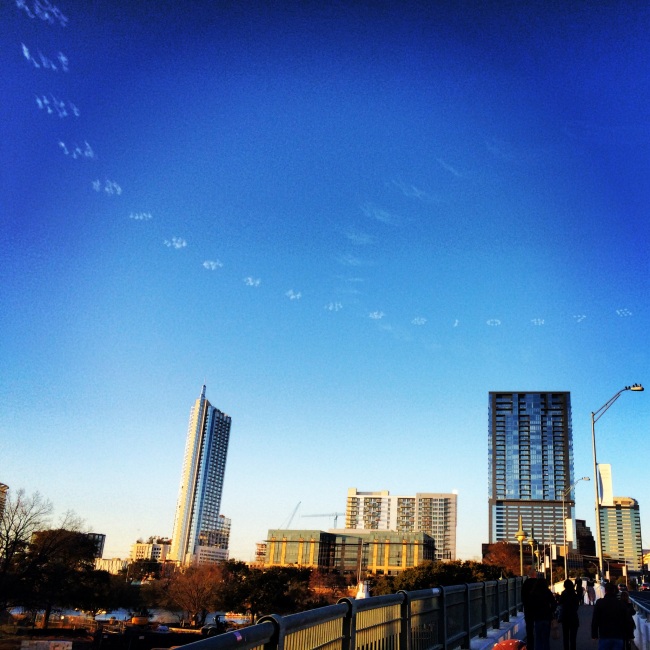 The digital-font numbers were written in circles and faded away pretty quick…I’ll admit, until we had it figured out, I was a little freaked!  But this was just another “Pi in the Sky” idea, so very typical of SXSW!  It was a representation of Pi (well some of it, at least) to commemorate national Pi day which was the next day, falling on none other than March 14th or aptly, 3.14.

There were a few other events sprinkled in:  a morning sitting in on a live broadcast at the W hotel for the annual KSGR at the W showcase.  We saw Phantogram –a band I had particularly wanted to see live at SX this year– as well as The Hold Steady in an intimate acoustic setting.  Also, I went on an impromptu afternoon to a venue on S. Congress to see live radio interviews w/ Foster the People & Ludacris.  Oh, and to Luda’s manager:  sorry I never showed up backstage…apparently I cannot input cellular telephone digits while I’m driving & you’re shouting them to me from the passenger side of your murdered out SUV.  Thank you for the offer to attend Luda’s Dorito’s Bold Stage show as your guest…maybe next year?  haha!  (and yes, that happened.)

Overall, my SXSW experience this year was more curated & thus, tamer as I originally had intended.  I’ve learned it’s not about how many events & people & places you can squeeze in and consequently, burn yourself out on.  Forget about all that crappy swag, overly ambitious crowd, and free warm beer, people.  To me, the spirit of the festival is more about experiencing cutting-edge technology & undiscovered art & cool people, which organically prompts authentic engagement.  –THAT’S what makes SXSW something special.