I’m tickled, almost giddy, that March is finally here, aren’t you?  With the first day of spring and St. Patrick’s Day just around the corner, there’s no shortage of fun things going on this month.  However, the biggest event of them all, –the one that (if you’re in Austin) simply cannot be ignored– is of course, South By Southwest.

As of a couple days ago, the annual interactive/film/music festival has commenced, beginning two weeks of parties, concerts, networking, and fun.  Last year, I was like a kid in a candy store, RSVPing for (almost) any & all events I could get into sans-badge…that approach yielded entry into many o’ interactive event with open bar & free food, but left me burned out on the whole thing by the time the music week rolled around.  This year, I’ve decided to be more selective about my RSVP list and purposely not keeping a packed schedule of events for each day.  See, we Austinites have a bit of a love/hate relationship with the festival:  we get irked by our sudden trouble finding parking, the long lines to get into our regular spots, the crowds of ‘definitely-not-from-these-parts’ people who descend upon our stomping grounds, but we very much look forward to such an imaginative event that comes right into our backyard, bringing celebs, bands, and free drinks in tow.  Here’s a hilarious satire expressing why some residents “hate” SX but really, we locals –well, at least half of us– are very VERY excited for the festivities.

I had invites dating back to Wednesday of last week, but last night was my first opportunity to get in a good, solid night out on the town.  First stop was TRIO at the Four Seasons hotel.  I had friends visiting from Houston and thought this would be the perfect place to take them to get a little slice of the SX buzz.  For dinner, we started with tuna tartare, my guests had prime rib & filet respectively, and I went for Gulf-sourced snapper.  And let’s not forget about our shared side of mac & cheese…c’mon!  I’m of the age & discipline to have phased out the Kraft boxed variety from my diet but when you see mac & cheese on the menu at a fancy restaurant doesn’t it practically command you to order it?  I feel like I need to compare it to every other mac & cheese I’ve had in life.  We paired the meal with a bottle of Banshee pinot noir and thoroughly enjoyed the experience.  TRIO is not your typical hotel restaurant, it’s actually a reputable establishment in the competitive Austin-dining climate, but it’s also a hotbed of celebrities who are staying in town for the conference.  Which brings me to my first celeb spotting of the festival…

When I walked through the hotel entry doors, I immediately saw Seth Meyers of SNL fame and most recently, Late Night With Seth Meyers.  –Isn’t his new show so great, by the way?  I usually have no patience for the shenanigans of late night talk shows, but he as a host keeps me hooked.  Kanye West’s recent performance of career-spanning hits was EPIC and it was only the second show of what I hope is a long running late night program.  Anyway, once I saw him it took my brain a hot second to realize that it was actually him and then (of course) I couldn’t look away as I passed him in the doorway.  And girls, guess what happened next:  he paused his conversation, looked up, & smiled at me –Swoon!  I thought it was so sweet of him to acknowledge a fan and take a moment to make eye contact & smile back.  It’s like you could tell he’s a nice person in just that two-second moment.

After dinner –and accidentally walking right into the path of Danny Trejo (MACHETE!!!)— we headed off to the evening’s main programming:  the Madi Diaz concert at Anthropologie downtown Austin.  As most of y’all know I work there part-time (it’ll be TWO YEARS next month!) but I missed the event a couple years ago when Anthro’s Push Play Project hosted Ingrid Michaelson.  Even though I’m an employee, I still had to secure a spot on the list like everybody else & luckily I snagged a spot for myself & a plus one.  I was happy make it out this time around because it really is quite the exclusive, intimate musical experience.  Admittedly, I wasn’t familiar with Madi Diaz prior to this show, but her rounded-out set and stellar performance left everyone awed.  I was kinda astonished she sounded so flawless in a retail store not designed for acoustics, without a backing track or any of the modern auto-tune crap we’re used to hearing from pop stars these days.  And, I love that she’s an artist that has mastered two moods in her music:  one is more emo, with sad ballads you want to listen to on a rainy Sunday morning; but then there’s the flip side of her sound, prompting dancing & delight with the added vibe of accompanying artists on keyboard & drums.  Cracking jokes in between songs, it doesn’t hurt that she’s got a great rapport with her audience as well.  My girlfriends and I all left the show as her newest fans.  Thank you to Anthropologie for helping us discover new music by bringing the Push Play Project back to Austin!

After such a great show, I was thoroughly fulfilled with the result of the evening’s activities and was ready to call it a night…but of course my gal pals would hear of no such thing!  Here’s why I’m glad I didn’t bail early:

We then decided to head further downtown into the epicenter of the SX mayhem…a couple of people in our group had RSVPs into parties at Hangar Lounge & another venue.  As we were waiting in line for one of them in the misty chill, I spotted  Astronaut Howard Wolowitz (well, Simon Helberg, actually) waiting in line behind us.  As a HUGE The Big Bang Theory fan, I geeked out like one of their characters would do if they found an early, limited edition issue in the clearance bin at the comic book store.  Seriously, I’ve seen every single episode in the show’s seven seasons and can go word-for-word with the theme song.  –It’s funny:  if I skip out on the theme song for any given episode, my husband actually stops, rewinds the DVR and won’t press play until I agree to sing along!  Anyway, Howie (as Bernadette calls him) or HOWAAAARD! (as his Mother would shout) is my second favorite character on the series, behind University of Houston’s own Jim Parsons/Dr. Sheldon Cooper, of course.  It was pretty cool… we were standing out in the street in. the. rain. and he stopped to chat & snap a quick pic.  Thank you Howard Wolo– I mean, SIMON HELBERG for this awesome selfie!  Oh, the magic of SXSW!!! 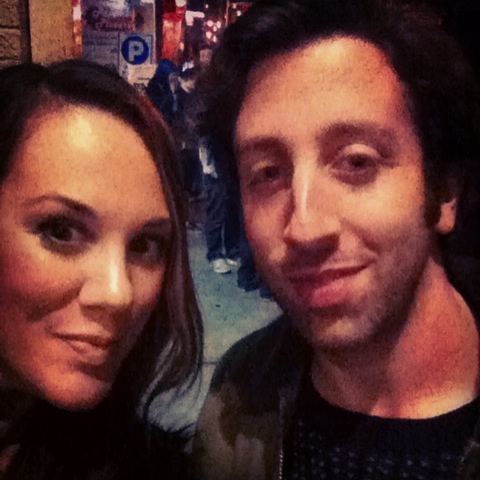