Ah, it’s that time of year again:  the kids are back at school, the weather’s becoming crisp & cool, and row after row of fans gather to watch the action play out…  No, I’m not paying homage to football season — I’m talking about Fashion Week!  Wouldn’t you agree that Fall is the absolute best time of year to celebrate fashion…magazines release their mammoth September issues (um, my Vogue this year is a phone book!), bloggers & stylists map out their top trend predictions, and stores begin to stock gorgeous indulgent wardrobe pieces from our favorite labels.  I swoon over the touch of quality cashmere, that badass-feeling I assume in leather, and how skinny I somehow appear in the season’s latest skinny jeans.  Fall is simply fashion at its finest.

Back in mid-August, some girlfriends and I kicked things off downtown in the 2nd Street Shopping District.  As part of Austin Fashion Week, we hit up a few of our local boutiques to see what was going on and our favorite party of the evening was at Hemline, by far.  Since they were founded in New Orleans’ French Quarter, they held a fitting Southern Summer Soiree complete with Cajun food, Abita beer on tap, and a couple designer trunk shows.  I spent the evening with senses satisfied by the huge spread of boiled shrimp, jambalaya (don’t doubt — I straight up GRUB at even the hautest of fashion events if the food is that good!), complimentary chardonnay, and watching live “mannequins” model the featured designers’ sartorial samples.  This totally free, no RSVP required, open to the public event was such an engaging mix of southern hospitality, food, and fashion!

The next Austin Fashion Week event I attended was the official after party.  I had a couple of sorority sisters in town from Houston and this was the perfect choice for a let’s-do-something-different type of Saturday night.  Although this was a ticketed event, we were able to snag a sweet friends & family discount that made it totally worthwhile.  This was another fashion week party with gourmet catering & open bar, not to mention all the utterly interesting expressions of fine arts.  Some of the acts to take the runway stage included: 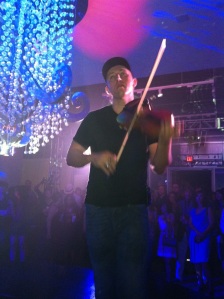 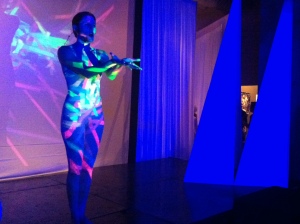 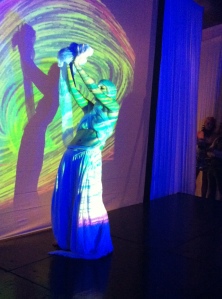 an interpretative dancer…
~Pretty sure the bundle of fabric she’s holding was a progeny she just symbolically birthed…maybe she’s presenting it up Lion King-style in sacrifice to the fashion gods?  😉 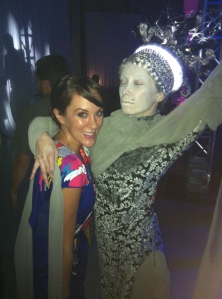 …and “living statue installations,” just to name a few.

After the final runway show, –where the models wore illuminated medallions sewn into goth Victorian dress (picture Iron Man meets Helena Bonham Carter)– we enjoyed some chocolate-covered strawberries, spotted a few local “celebs,” took pics with a couple of the models, and left for a nightcap at the W Living Room. 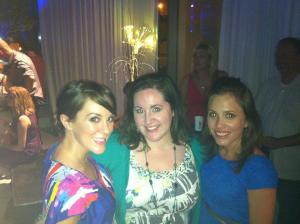 Next, came Fashion’s Night Out 2012!  I celebrated last year in Kansas City bouncing around the Country Club Plaza but my second time participating in FNO festivities was enjoyed right here in the ATX at Saks.  My friend Lori and I made the drive out to Arboretum Market and were greeted by libations, an aerialist swinging around in the shoe department, and her super-friendly super-chic personal shopper.  I tried on a killer Parker black leather dress & a Joie white lace crop top while helping Lori determine that she simply couldn’t leave without an amazing Theory leather jacket, among other goodies.  In our excited state of fashion reverie, we completely missed out on the goodie bags, dinner buffet, and cupcake station, but no matter; we had such fun making our own party in the fancy Fifth Avenue Club dressing room.

I’ve never been to NYFW, but maybe one day I’ll get to catch a major designer’s runway show in New York, Paris, or London.  Until then, there have been plenty of opportunities locally to satisfy my craving for fresh fall fashion.  So, while New York’s top fashionistas are currently cabbing to & from Lincoln Center as part of Mercedes-Benz Fashion Week, I’ve got plenty o’ parties to keep me busy right here at home, thank you.  While the weather here is still kinda hot as hades, all these fun events about town would put even the most devout jorts & flip-flops wearin’ Austinite into the fall fashion spirit!  Next up, there’s the events of TRIBEZA Style Week as an option to attend and, then…darlings, there’s just plain ol’ shopping.  –I’m thinking my own autumn wardrobe would be rounded out nicely with something in the color du jour:  oxblood, a little lace, a little leather, and the perfect shade of dark lipstick.  Tres chic!